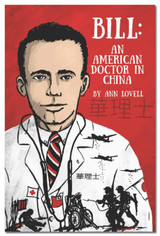 Bill Wallace was an American doctor who lived and worked in Wuzhou, China, from 1935 until his death at the hands of the Communists in 1951. From the moment he arrived, China was at war or threatened by war, first from the Japanese and then from the Communists. Through it all, Bill and the staff of Stout Memorial Hospital loved and cared for the people. Stout Memorial Hospital became known as "the life of China."

With the start of the Korean War in July 1950, the Communists began a campaign against "American Imperialists." At rallies, Communist leaders began to denounce American “exploiters.” The problem in Wuzhou was that the only American most of the Chinese knew was Bill Wallace. His life made the charges against America seem ridiculous. The Communists knew the only way to discredit America was to discredit Bill Wallace.

Based on the 1963 book, "Bill Wallace of China," by Jesse Fletcher, and rewritten for kids by Ann Lovell, this book brings the true story of Bill Wallace to life for a new generation of children, ages 10-12.

All proceeds from the sale of this book benefit the Lottie Moon Christmas Offering®.

Rebekah: An American Surgeon in India